This little snippet is from Harvest Home, 1891. I kind of feel like I know these people who wrote this book, like I am one of the children they wrote it for! It gives me immense joy to read these interesting books. 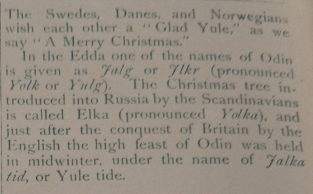 The ancient name (Yule) for Christmas is still used throughout all Scandinavia. The Swedes, Danes, and Norwegians wish each other a “Glad Yule,” as we say “A Merry Christmas.”

In the Edda one of the names of Odin is given as Jalg or Jlkr (pronounced Yolk or Yulg). The Christmas tree introduced into Russia by the Scandinavians is called Elka (pronounced Yolka), and just after the conquest of Britain by the English the high feast of Odin was held in midwinter, under the name of Jalka tid, or Yule tide.

Here’s a song lamenting that Santa Claus only comes once a year. Songs of Childhood, 1923.

Why do you come but once a year,
Santa Claus, Santa Claus?
We need you more often to bring good cheer,
Dear Santa Claus.