This sweet story is from Our Darlings, a British publication that I acquired in York, England. 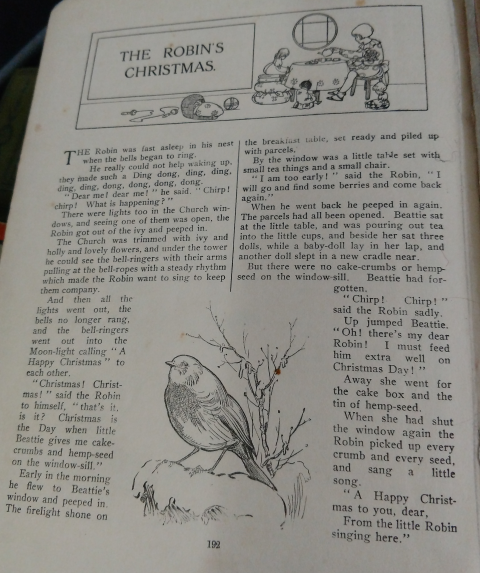 The Robin was fast asleep in his nest when the bells began to ring.

There were lights too in the Church windows, and seeing one of them was open, the Robin got out of the ivy and peeped in.

The Church was trimmed with ivy and holly and lovely flowers, and under the tower he could see the bell-ringers with their arms pulling at the bell-ropes with a steady rhythm which made the Robin want to sing to keep them company.

And then all the lights went out, the bells no longer rang, and the bell-ringers went out into the Moon-light calling “A Happy Christmas” to each other.

“Christmas! Christmas! said the Robin to himself, “that’s it, is it? Christmas is the Day when little Beattie gives me the cake-crumbs and hemp-seed on the window-sill.”

Early in the morning he flew to Beattie’s window and peeped in. The firelight shone on the breakfast table, set ready and piled with parcels.

By the window was a little table set with small tea things and a small chair.

“I am too early!” said the Robin, “I will go and find some berries and come back again.”

When he went back he peeped in again. The parcels had all been opened. Beattie sat at the little table, and was pouring out tea into the little cups, and beside her sat three dolls, while a baby-doll lay in her lap, and another doll slept in a new cradle near.

But there were no cake-crumbs or hemp-seed on the window-sill. Beattie had forgotten.

Up jumped Beattie. “Oh! there’s my dear Robin! I must feed him extra well on Christmas Day!”

Away she went for the cake box and the tin of hemp-seed.

When she had shut the window again the Robin picked up every crumb and every seed, and sang a little song.

“A Happy Christmas to you, dear.

From the little Robin singing here.”