Madge and Edith and Helen had plenty of dolls to play with. They had a baby-house, a pair of tame rabbits, and a big dog. They rolled hoop, played at keeping store, and made mud-pies. But better than any thing else they liked to dress up in their Aunt Kate’s dresses and play they were ladies. Aunt Kate did not like to lend her dresses, for they were always dusty when returned to her, and sometimes were torn; and it was a good deal of trouble to put them on the little girls, for of course they did not fit, and the sleeves were too long. But the kind aunt did not know how to refuse the children when they begged so hard.

“Make a train on my dress,” Madge would always say; and then Edith and Helen would beg for trains too.

“I wish there were trains to your own dresses,” said Aunt Kate; “then perhaps you wouldn’t want mine so often.”

“And we wish your dresses fitted us,” said Madge; “all the waists are to big.”

While the little girl was speaking a bright idea came into Aunt Kate’s head. Christmas was near at hand, and she had been wondering what she could give the children, for they already had more toys than they needed. Now she knew just what to give them.

She was shut up in her own room nearly all day for two weeks, and kept the door locked. The little girls could not guess what she was doing.

But on Christmas morning they had a grand surprise. Under the stocking of each child lay a big paste-board box. Madge opened hers first, and found a lovely little dress of blue cashmere, which reached to the floor in front, and had a long train at the back. The waist was a perfect fit, and there was

a little bonnet to match. Edith’s suit was cardinal, and Helen’s was pink; and they had bonnets, too.

They could hardly wait until after breakfast, so anxious were they to dress up in their new clothes.

“You couldn’t have given us anything that we would have liked better, Aunt Kate,” said Madge.

And Aunt Kate never again had to lend her dresses. 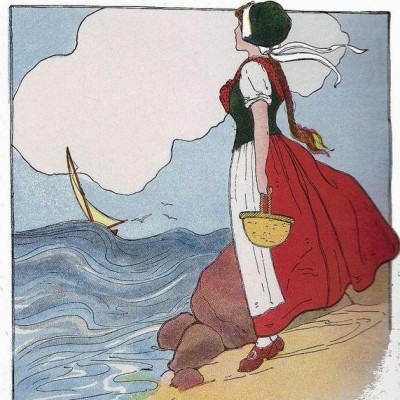